Complementarity teaches that women and men have distinct but complementary roles. In practice, women are ultimately valued for their roles as wives and mothers in the home and men are valued for their intellect and leadership in the world.

Complementarity carefully keeps women at arms length such that Church teaching, ecclesiology, liturgy and canon law are largely shaped without the benefit of women’s intellect, experience, faith and gifts.

More than ever, we need to present the ways in which the principle of complementarity fails in its stated desire to produce real equality between women and men. Men and women of faith can contribute to this ongoing dialogue by sharing their experiences and reflections what it means to be female, male or family in today’s world. 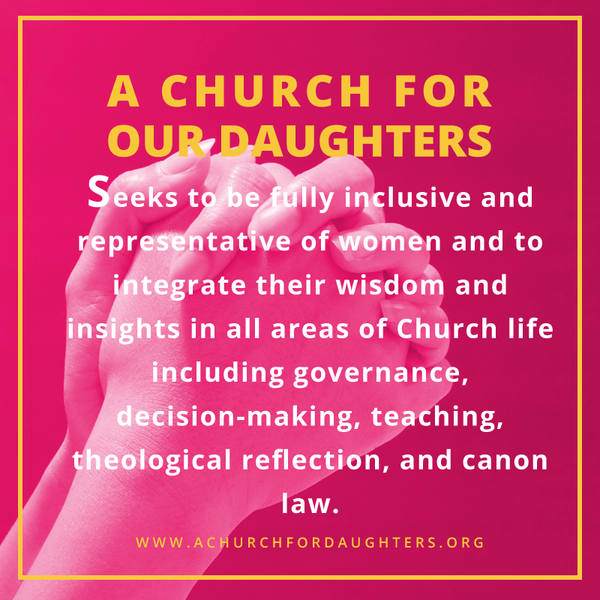 Up until the mid 20th century, popes, bishops, priests and theologians used language that explicitly demeaned women calling them, “the devil’s gateway” (Tertullian),  “defective” and “misbegotten males” (Aquinas).  Women were substandard in imaging God and a species suspect whose sexuality had to be controlled.

Yet, changes in Western society created new pressures on the Church to reformulate its language of subordination in a way that appealed to the new realities posed by women’s suffrage movements, the Universal Declaration of Human Rights (1948) and the Convention on the Rights of Women in Politics (1952).

As social science and newly emerging feminism(s) called traditional male and female roles into question, the Magisterium reacted at first with distrust and fear, reprimanding women for stepping out of their roles and warning them that their fight for equality would lead to their demise and the demise of the family.  But that language began to change with Pius XII, who incorporated the language of equality into his writings as the term complementarity first emerged into the magisterial lexicon.

So we have an absolute equality in personal and fundamental values, but different functions, which are complementary and superbly equivalent, and from them arise the various rights and duties of the one and the other. (The dignity of women (speech), 1957)

This re-write of the language of subordination allowed Pius to incorporate new realities rooted in human/women’s rights while succeeding in leaving the essential assumptions about the hierarchy of male/female roles unscathed.

Later the “equal but separate” framework was used by Paul VI in Inter Insigniores and perfected by John Paul II in his Theology of the Body and in later writings from Mulieris Dignitatem to Ordinatio Sacerdotalis to his Letter to Women.  Here he birthed phrases such as “the feminine genius” and offered Catholics a “new feminism.”  As such, he vigorously defended the hierarchy against what he considered to be the excesses of feminism creating strategy that exalted women but also punished their dissent and the dissent of male allies in defense of the male only priesthood.

Benedict XVI, who helped develop these teachings as Prefect of the Congregation for the Doctrine of the Faith, would take them to their dark logical conclusion calling the act of seeking ordination by women a “grave crime” with automatic excommunication, coupling those acts with clergy sex abuse, a callous distortion of the actions of those seeking equality and justice within the Church.  He also instigated two separate investigations of women religious (2009 and 2012) in the United States, the latter based on accusations that women religious were stepping out of their Vatican defined roles and undermining church moral teaching by promoting "radical feminist themes incompatible with the Catholic faith."

Yet, it is the rise of women’s voices within the Church since Vatican II that offers the most reliable path for uncovering the deficiencies found in complementarity and charting a path for true equality and justice.  As feminist, womanist and mujerista theologians and scholars began to populate universities and ultimately the landscape where Catholic teaching is disseminated, they have expertly illuminated the errors found in official magisterial formulations including those connected to the Theology of the Body and complementarity.  They critiqued the modern day re-write of patriarchal subordination found in complementarity’s framework, which is beginning to reveal its own deficiencies.

Throughout Pope Francis’ most recent apostolic exhortation, Amoris Laetitia, John Paul’s notions of complementarity still ride front and center, although there are signs of a struggle.  In paragraph 54, there is some evidence of progress in terms of Francis’ understanding and respect for feminism’s gains and goals.  Chapter 4 includes a solid critique of the way sexism and male domination function in marriage and in the world calling it sinful.  But in Chapter 5, Francis’ love affair with the foundational framework that is complementarity overtakes his struggle to find modern roles for women and men inside the family, Church and world.   He does not yet know how to reconcile modern women and men and his traditional notions of family and female/male roles.

More than ever, we need to present the ways in which the Theology of the Body and complementarity fail in their stated desire to produce real equality between women and men.  Men and women of faith can contribute to this ongoing dialogue by sharing their experiences and reflections what it means to be female, male or family in today’s world.